The  roll out of 5G is encountering more resistance including a legal challenge (https://actionagainst5g.org/) and an international petition. In general petitions against 5G are asking for a halt until further scientific investigation can be conducted.  The petition website has links to a number of scientific studies but more long term studies are needed and they should be independent. Of course it is difficult to raise funds for such investigations because the  future has already been mapped out.  Check out the scientific references on the website and sign the petition. See here: Stop 5G on Earth and in Space

Of course, many people have been brainwashed into believing that 5G is the same as 4G. People even say silly things like “well I use a microwave” all the time (someone on twitter) my response is usually …….do you use your microwave like this –

Yes, anyone who objects is a “tin foil hat wearer” …..I have heard all the jokes…how about this one: All jokes aside there are serious scientists with serious concerns.   We know that microwaves are used by the military as ADS (Active Denial Systems).  So, if they are directed and the correct frequency they can be weaponized.  Doesn’t that make people even a little bit uncomfortable?  Has a weapon ever been made that was not used?  Nuff said.

Furthermore, we do not know are the long term consequences. So, what do we do?  Shall we use it for the next ten years and then find that irreversible damage has been done? And what about cumulative damage?  They need to (at the very least) keep 4G running alongside 5G (which has reliability issues).  We are living in an electronic fog and they are already talking about terahertz (6G). We are actually electrical beings and the “force field” of one person can influence that of another.  Are we to believe that living in a constant electronic fog is somehow good for us?

Science of the Heart

Of course we are talking about damage to health and we have not even broached the subject of privacy or the surveillance state.   They need 5G in order to introduce the Fourth Industrial Revolution and AI.   When even people like the late Stephen Hawkins warn about the dangers that AI poses then people should listen. Can you imagine a future where a Hilary Clinton or a Trump are interfaced with a super computer?  I would rather be dead (lol).

With higher frequencies you get high bandwidth, but shorter distances and significantly less penetration through obstacles/walls/etc and line of sight becomes important for the “max speeds”.  Long range robots/drones use lower frequencies than 2.4 GHz because of the range, for example a LoRa 433mhz card ($3-$5) the size of a quarter has a 10 Kilometer range with great penetration, but low bandwidth, while a 2.4ghz card has a range up to ~1100 meters, but penetrates walls/trees/etc well.  However, as Joe Imbrianio has pointed out (following some scientific studies) if you are at 60GHz you are at the range in which oxygen is excited (see: https://www.biblaridion.info/blog/the-fog-descends/). That cannot be a good thing.

Major paper on the risks of wireless radiation & #5G to human health, released from (astoundingly!) the IEEE, the Institute of Electrical and Electronics Engineers. This is a generally cautious professional body. Even they are now acknowledging the risk. https://t.co/L83KVOdy21 pic.twitter.com/eFx7TaYWri

So, there is already plenty to be concerned about without even broaching any “conspiracy theories”.   The fact is that any connections between Covid-19 and 5G attracts the full wrath of the censorship and de-platforming brigade (as it did with David Icke).   That in itself makes me suspicious. If it is such a way out, nutty idea then it will die a natural death.  Just ignore it. But it really, really upsets them.  For that reason alone it is worth repeating (lol).  Watch the short video doing the rounds and we will discuss it afterwards.

Now we already carried a link to this page in an older blog post and the one thing that was strange about the Wu-flu was the way some people dropped unconsciousness (dead) on the spot and collapsed which looked like heart failure to me rather than some sort of respiratory disease  (https://www.biblaridion.info/blog/wu-flu-and-5g/). Apparently Northern Italy also  had  5G rollout.    However, other countries did not. We also demonstrated that when new telecommunications were rolled out in Japan the Kawasaki epidemic appeared in children.  Scientists that investigated the outbreak found that the wind was blowing from the direction of China every time it happened but they could not find a vector (virus, fungi etc) in the wind. (https://www.biblaridion.info/blog/kawasaki-disease/)

We remarked that correlation is not causation.  Just because all airplanes have windows we cannot claim that windows make airplanes fly.  Just because the wind blows from China does not mean that is the cause. The same with our observation. It is however very suspicious.   It is an oversimplification to assume that there is a singular cause. Epidemiologists  have noted that both Wuhan and Northern Italy are very industrialized and had very high air pollution and incidences of respiratory diseases. Italy also had undergone a vaccination program (not sure about China) just before the outbreak.  All these things compromise the immune system and can provoke a cytokine storm.  So, perhaps 5G was a contributing factor.   The problem is that we will never know. There is too much money involved and they will not fund independent research.  When you deny people legitimate avenues of investigation you encourage speculation and “conspiracy theories”.

I leave you with this (which I find amusing) and two links to petitions for Australian readers:

Petition EN1528 – Stop coercion of Australians to be medicated with Influenza Vaccinations https://www.aph.gov.au/petition_list?id=EN1528

We have just had a 7.7 quake near Cuba (more on this later). Here follows a Twitter channel worth following:

Ready for the new #SpaceWeatherWoman forecast? Its up! See details on the coming #solarstorm, including when & where to catch #aurora. Learn how #GPS reception & #emergency radio communications will fare with the two new active regions emerging on our Sun: https://t.co/JCTv88EFOI pic.twitter.com/alrzFTOy6u

“The second we get a sunspot we have a 7.7 [quake]. This pattern hasn’t stopped since the sun went into grand minimum. The sun is deader than a door-nail and if it get any activity we get quakes. Just like every other grand minimum. The volcanoes go when the sun has no spots and the cosmic rays are highest, and when you do get spots or storms we get earthquakes. This is actuated by your decreasing magnetic fields that even NASA has admitted for 20 years now”.

“Holy ****, we actually got a tiny sunspot, no wonder. We get Aurora now whether we have spots or not. We have a 200 year low in spots and almost never any at all. Expect the giant quakes to return when we hit tiny maximum in a few years. And of course, when these nothing burgers happen with our lowered magnetic fields they come up with all sorts of ways to explain their increased impact”.

“This was preceded by quakes in Puerto Rico. I also saw a big blot echo in Peru or somewhere around there recently. I think there may have been one in Caribbean too. Those are almost always and indication of bigger earthquakes. Surprised they don’t put earthquake warning out when we see those”.

The huge 7.7 quake recently happened of the coast of Cuba:

This earthquake epicenter occurred along a “strike-slip fault” located between the North American Plate and Caribbean Plate. This scenario has minimal tsunami threat as land slides horizontally across rather than vertically. Did you feel it? #Caribbean #Earthquake pic.twitter.com/fJBtWpu2H1

As usual I urge you to make up your own mind.  Is it coincidence that climate change (whatever that is) coincides with increased earthquake activity and pole shift?   I don’t think so.  Of course it is true that correlation is not causation.  What do I mean by that?   Let me tell you a story…… 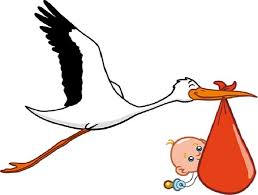 It was noted that women always got pregnant in the spring when storks returned from their migration and built nests on the chimney. It was concluded that the storks brought the babies.

Therefore solar activity and earthquakes might be totally unrelated.  However, (for what it is worth) I don’t think that is the case.  It seems logical to me that “earth weather” is influenced by “space weather” and that our inner iron core is influenced by magnetism (or the absence/reduction of magnetism).  The climate change supporters have latched onto space  weather and pole shift and are now arguing that pole shift is caused by “earth wobble” namely, the melting ice caps cause a weight redistribution (of water) which in turn causes the core to move and that results in earthquakes.  I find this disingenuous because the new religion of climate change blames everything on man made CO2 .

First, the loss of polar ice is disputed as is almost every other claim made by climate change. Sea levels have certainly not increased as much as they predicted no matter what they say and neither has the average temperature.  Secondly, the polar shift event is periodic as established by Geo-science and ancient cave paintings etc.  That means it happened before civilization and before man made CO2.  It seems then that the Z-pinch plasma event is not caused by “earth wobble” the opposite is true.  The sun (and Space Weather) influences our magnetic field and therefore the amount of incoming radiation.  In turn this causes (?) magnetic pole shift.   Are we to believe that all this has nothing to do with climate, sea currents, upper atmospherics etc?

Does all this explain periodic cold (ice age) and warming earth phases, or is it all due to Milankovitch Cycles and Precession etc?  There are probably dynamic and complex feedback loops between all these processes (including CO2).  Scientific reductionism and binary answers are simplistic and therefore probably wrong.   All these things are in play.  We are not God and we do not know everything.  We are like the kid who takes apart his clock and puts it back together and then finds that he has parts left over (LOL).  A man (and mankind) needs to know his limitations.  My opinion….they are connected in complex ways that we don’t fully understand. Man without God is like the beast that perishes.  Sometimes we are just dumb animals.