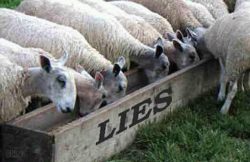 The Good Shepherd lays down his life for the sheep.  All that came before come to rob, kill and destroy.

I Am John Cullen adds the following MEA CULPA under his video: A number of viewers have commented already that they are hearing it differently from my first interpretation.. You guys seem to be hearing “221,000-442,000 infected…” which WOULD push the mortality rate WAY down… I think you guys are correct, and my initial “Closed Captioning” of the video is INCORRECT.

This is the musical background to his video:Don’t Fear The Reaper (Denmark + Winter Re:Imagined)

See the following article in the Guardian COVID-19 deaths globally rise for 2-3 weeks, peak at 4-6 weeks, then decline to near zero in 3 weeks. Visually verified here: https://t.co/yQXCeDTaBo
Same trajectory for ~95% of countries REGARDLESS of mitigation strategy. China is the early model.

The pandemic is nearly over.💫 pic.twitter.com/eFJAhpr1Ny

Something wicked our way comes

I do not know whatever else Louis Farrakhan believes therefore I cannot endorse everything he says but he is 100% correct here.  Powerful words:

The center of the American political system is the Scottish Rite lodge & Chabad, not a church! What Christian values? US’ decline isn’t b/c of some Russian philosopher, but the work of God’s judgement.

The word Lifehacker is usually used in a positive sense – it means a short cut to make your life more productive. A silly example might be brushing your teeth under the shower. I use the word in my next video and in the article title in a negative sense. Someone has acted as a Lifehacker by taking away productive time. We have been “hacked” by a virus which is just a form of “malware” and like all hackers they have signed their “creation”. It is not coincidence.

Below are some more good videos. Interesting to note that Adam mentions Polly and says that she was a big Qanon supporter but is now having some doubts.  He is right about that and I have sent her many tweets telling her that “There are no good guys” and others are also reminding her and she is perhaps reconsidering some things.  I cannot blame people….they want a hero….but do not look to man as they will always disappoint.  Polly does some great research work and is to be supported for that reason but Adam is rightly critical.

Israel is an advanced cyber and medical  power. This is probably because of its connections with the USA and with Russia. China is well known for stealing intellectual property but Israel has been doing the same for a long time. Israel always steals from its allies. What is yours is mine and what is mine is mine. (lol)  Adam mentions Ted Cruz wanting the USA to form ever closer ties with the Israeli medical pharma industry. This got sent to me by a fellow Christian in a magazine (Splinters):

Researchers at Migal Galilee Research Institute in Kiryat Shmona, Israel, are swiftly preparing a coronavirus vaccine which should be ready for clinical testing in less than 10 weeks, according to the institute’s CEO. David Zigdon had already reported that the researches have been working for about four years toward a vaccine which could be adapted to combat various human viruses, but is now being focused against Covid-19, the human strain of coronavirus. IBV (Infectious Bronchitis Virus), is a disease affecting poultry, and has been the institute’s focus until now. Researchers have successfully made the required genetic adaptations of the vaccine to Covid-19 and are applying their efforts to achieve the safety standards that will allow in-vivo testing (testing in live subjects) to move forward. The vaccine will be administered orally, which will make it easier to access and administer once it is available. <>Jewish News Service

Well that is OK then. It might take other countries a year to eighteen months but Israel will be ready with a vaccine in ten weeks.  And it will be oral not invasive like an injection.   Do you see how they did that?  Are you paying attention?  They set up a bogey man (Gates) then offer an alternative solution that is far more palatable (pun intended).  It is such a stroke of luck that they were already working on it.  Israel is also working on tacking systems (for the virus of course). I would bet money on it that it will be smartphone related and not invasive. That is how they operate.  They hold up an unreasonable solution and then offer you an alternative.  Most people will say….its not so bad….we have lots of apps on our phones….all this nonsense about chipping us…baloney.  That is how they operate. Always. Do not be fooled.  They float ideas and measure the opposition then backtrack and adjust the program but they move relentlessly forward (like the Terminator).

Now it turns out that some of us were correct all along: https://t.co/0LMdKPrQ2J

It seems as if ppl are not taking in the massive rule changes that have been put in place to enable #covid19 to be diagnosed absent any hard evidence of infection.

We now have whistle-blower physicians with decades of medical practice, who expose the new CDC Guidelines on recording #COVID19 deaths for what they are – a policy encouraging deliberate misrepresentation of the cause of death on official Gov. documents:https://t.co/dlXrLPCHZr