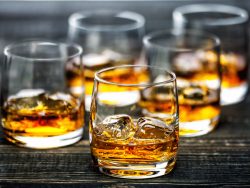 I have started my cure early (as a preventative measure) - whiskey and honey. This is what struck me in the article:

We suggested this in a previous article and it seems highly suspicious especially when the Creator Of US BioWeapons Act Says Coronavirus Is Biological Warfare Weapon. The situation in Wuhan seem to be more serious than we are told the death toll climbed 18% overnight one traped student likened it to the Zombie Apocalypse. These are the Twitter examples given:

"We Cannot Be Isolated": Iran Warns At Start Of Joint Naval Drills With Russia & China Not the three stooges

"US Dominance In Mideast Is Over": Iran Declares After Joint Drills With Russia & China.

Cartoon shared by Iran Navy's Telegram channel amid joint naval drills with Russia and China which started today and will last until Monday pic.twitter.com/dBE9Q7JPX9

China just cancelled development of two new aircraft carriers that have been in the works for ten years because they have become too expensive for China's declining economy. Russia's only carrier was in a dry dock that sank, and a crane collapsed onto its flight deck causing $1.5bn in damage, and a fire burned through its controls. But since the only dry dock that can handle the carrier is sunk, there is no proper facility to repair the ship. And Iran???  Their navy relies on inflatables.....

The US is the only naval super-power.  But what does that mean in an asymmetrical war? Russian missiles can take out Air Craft Carriers from 1500KM away.  Hyper-sonic missiles travel at 27x the speed of sound. Why do you think Trump just founded the US Space Force?   However, there are others who suggest that the US is quietly winning the hypersonics race, but is that propaganda?   One conspiracy theory runs that the U.S. is giving Russia 2nd level tech in weaponry through the globalists: "The U.S. is far, far ahead of hypersonic weapons. They want America's military to be taken out in a surprise attack after giving them this tech developed by the U.S. This incident will give them the excuse needed to emerge with black budget tech to implement the New World Order. The globalists that run the world are intentionally provoking Russia so that they will attack".   Who knows?  Seems implausible to me but when you consider that Wall Street funded the Communist revolution nothing would surprise me.  Remember the Hegelian dialectical?   Action, Reaction, Solution.    Anyway, Iran et al do not need naval superiority.  All they need to do is block the straits of Hormuz and the global economy collapses.  Iran has more A2D2 missiles than America has aircraft and they would not hesitate to rain down thousands of them on Tel Aviv.  Iran's geography probably means a land battle is out of the picture.  However, if America wants war, there will be war.  Zionism was an American project , inherited from England.  They have been the  foundations of the Empire  from the beginning. The U.S. military conducted air strikes in Iraq and Syria against the five facilities controlled by the Kataib Hezbollah militia group supposedly in response to the killing of a U.S. civilian contractor in a rocket attack on an Iraqi military base.   They are obviously sending a message to Iran (after the naval exercises with Russia and China).   The US has not been very concerned about "contractors" (mercenaries) in the past.

The Department of Defense released footage of some of the recent strikes against Hezbollah targets - three in Iraq and and two in Syria - it carried out near the end of December. (Tech. Sgt. Joseph Park / U.S. Air Forces Central Command). This is all very exciting footage and shows US air superiority.  How bold and clever. It is all very clinical and sanitized in the air....almost like a video  game.  They do't show you what happens on the ground. They don't show you all the running and screaming. They don't show you the body parts and the blood.  Nor do they show you that 19 people were killed for one US contractor.    By the way, this attack is not in Iran....it is in Iraq (I bet those Iraqis are loving their free-dumb).

This is the command and control building of #PMU's 45th Brigade (#IRGC backed Kataib Hezbollah) in #AlQaim, West of #Iraq. In total 27 members of 45th and 46th Brigades as well as #IRGC Quds Force are killed in this #USAF airstrike. pic.twitter.com/kaeTCKGQt7

Libya is enjoying the post Gaddafi era.  Except for the death and stuff.  Now let me see if I have got this right?  It is now Turkey (and Qatar) interfering by supplying ISIS mercenaries to fight the government  forces in Libya and France and Egypt are objecting?  Didn't France help liberate Libya?  Maybe Macaroni can join the foreign legion and use his god-like Rothschild powers to defeat evil?   Somewhere in hell Gaddaffi is laughing his  ass-off (although the bayonet still hurts).

Oh dear, all that fuss about the "Afghan papers"  that were leaked by Wiki leaks.  So, they knew that the war was "unwinnable" from the start and LIED.   The horror, the horror.  Of course they did. All these analysts wring their hands.....it was never about "winning" (doh).  As an annonomous comment puts it; "The crime of the century was the incident that precipitated the War in Afghanistan. The Taliban were supposedly ready to extradite bin Laden - IF the US provided proof of his involvement in 9/11. Was there a problem coming up with that proof?  It is clear that Bush and Cheney were chomping at the bit to go after Iraq. Not sure about that either. Iraq was making concessions according to numerous reports. They sure didn't want another war as they knew they'd get their butts kicked. Eliminating a secular regime was pure idiocy - and though Saddam Hussein wasn't the brightest bulb (though you can kind of forgive him for misunderstanding the US Ambassador over Kuwait), the US had used him for years in that proxy war with Iran.  9/11 was far too convenient for too many people. Billions in insurance payouts. Missing gold and silver, Hundreds of billions in questionable bonds cleared in the following week, plus all those investigations into financial crimes that died when evidence was destroyed - in NY and DC.

It was the excuse for never-ending wars, The Patriot Act and so much more. It wasn't a new Pearl Harbor, it was our burning of the Reichstag. But after the original fire, the resulting government lasted only 12 years - 1933 to 1945. We're still fighting in the Middle east after 18 years and are still operating under the Patriot Act with Homeland Security and all the other things brought to us by our Reichstag fire - with no end in sight. Last laugh is on the perpetrators. They may get their defacto dictatorship but they've inherited a bankrupt Empire".

But they have always got the DRUGS.   Guard the drugs well boys, we wouldn't want them to fall into the wrong hands. How the CIA Turned Us onto LSD and Heroin: Secrets of America's War on Drugs
New History Channel series explores the dark corners of prohibition and takes viewers on great, freaky trip. https://reason.com/podcast/anthony-lappe-lsd-heroin-cia-podcast/

The Anglo-Zionist empire has always dealt drugs.   They had a Jew selling opium to China in the 1800's.  The more things change the more they stay the same.  Deal drugs, steal  oil.....

category: Fake News Comments Off on Fake news and omission

I am glad to see that Caitlin has written an article on this topic as I already mentioned it in one of my blogs. The news cycle deliberately omits things it does not want you to know. Out of sight is out of mind. Of the top of my head I can think of a number of topics such as Julian Assange, the yellow vest protests and the chemical weapons fiasco.  If a tree falls in the forest and no one hears it fall did it really fall?   Of course it did.  These are sins of omission not sins of commission.

And then there is this

P.S. Afghanistan is needed for the drugs as was Vietnam (Air America) and the South America "contra/CIA"  cocaine crack drug running.  Without drug money no black opps and no banks.