The Depths of Satan

This article will look at some rather unsavory topics and will no doubt attract the label antisemitic.   As long as we tell the truth we no longer care about such labels which are used so that the goyim will self-censor.  That trick no longer works.  I urge you to watch the next video about the Zohar by Christopher Jon Bjerknes in full.  It is about 50 minutes long and for many Christians it will be an eye opener.  It demonstrates why the Jews promote androgyny  or what is known as transgenderism.

Unfortunately Christopher Jon Bjerknes has  fallen pray to the mistake that many Christians make, which is rejection of the Old Testament God.  I understand how this has happened and in some ways it is a natural reaction (over reaction).  However, the jealous God of the OT is the same loving Father of the NT not a different being.  The revulsion comes from the spin that traditional Judaism has put on the Torah.   The jealousy of God should be understood within the covenant relationship (marriage to Israel)   who were made to drink the waters of jealousy for their infidelity (Ex 32:20 compare Num 5: 24).  It is not to be understood as  genocidal impulses (Bjerknes) just as the war against Amelek from generation to generation is a metaphor for the war against sin which was typified by Moses stretching his arms out in the symbol of the cross (Ex 17:10-16).  I place this video here because Bjerknes has an extensive knowledge of the Kabbalah , Zohar etc…not because of his knowledge of the Torah.

If you watched the above videoyou will have learnt a number of important things. Firstly, Tikkun Olam means “healing the world” and the way to heal the world so that the “true light” can be revealed is to remove the goyim (Amalek/Edom) by means deception.

This has been done by cultural Marxism which is itself an extension of Marxism unleashed on the culture to cause chaos. If you want order out of chaos you first need to create the chaos. One way of doing that is blurring the boundaries ordained by God (male/female etc) and creating division hence  all the Jewish “isms”.    Transgenderism, Lesbianism, Feminism, Racism blah, blah.   They promoted abortion and they promote vaccines. They milk the goyim with usury.  They are destroyers and will keep destroying until they have a world of their own. Their religion has reverted to the equivalent of Asherah worship and the Canaanite religions or of Moloch with child sacrifice and their “star” (cf. the star of your god Remphan Acts 7.43).

This is a massive thread and very interesting. it shows just how deeply the idea has taken root (even subconsciously ) in society. Click on the tweet and follow it all the way down (26 tweets long; it did not compile properly.

Christians have been astonished over the last couple of years that the so-called “transgender” movement has so rapidly become such a big part of the global gay (aka “LGBTQ”) agenda. pic.twitter.com/RgZAJ0oFXM

The following thread on pornography is also very good.  It is a deliberate obstacle to make you weak and addicted. If you have been misled remember that the grace of God is sufficient for you and his strength is manifest in weakness. Do not give the enemy the satisfaction. It is the same serpent behind the seduction.

As a matter of fact.

Everything you need to know:

[back by popular demand] pic.twitter.com/AhaaLTSCIF

Now it is the children

If you had not realized it yet…new depths have been plummeted with grooming children for pedophilia and sex trafficking.  Yet another way to seduce and compromise (blackmail) the goyim (Epstein). 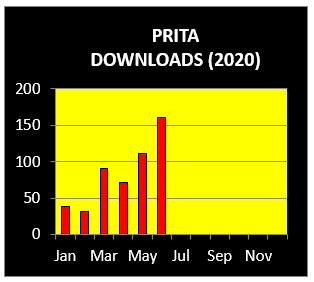 Every month I update the bar-chart which shows the number of downloads for PRITA (Pattern Recognition In The Apocalypse) and I was a bit late doing it this month. To my surprise I just had to re-scale the Y-axis because it was off the chart.  The top of the chart was 150 but 161 were downloaded last month. Also decent figures for the other commentaries and individual chapters.  Last year PRITA was downloaded 931 times I expect a significant increase this year and it is trending upwards.  Let us hope that more and more people realize that this is a repeat pattern that constantly cycles until it achieves fulfillment.  To understand the emergence of the beast you need to know what it looked like and how it acted in the past. The characteristics are easy to spot – it is arrogant, persecuting, oppressive and wicked.  It will brook no dissent because it thinks that it is God.  Last but not least despite all its cleverness and technological achievements and all its wonders and signs it is extremely stupid.  Evil always is.  They believe that knowledge is power and they want to suck up all the data and create their own matrix.  They have no idea what real power is.   If you have faith you have access to real power and neither fear nor death will separate you from the love of God.  The “all powerful” beast will emerge. Nothing can stop the beast or her rider the Great Whore. She will drink her fill again.  However, her destiny is the abyss.  The faithful will not be deceived by her sorcery or cowed by her power or seduced by her beauty. She is a dead thing and will be assigned to her grave and all the kings of the earth will be waiting there to greet her like they did Lucifer:

Now, before you get carried away the “Lucifer” here is the “morning star” the light-giver Venus (Ishtar) reference to the Assyrian-Babylonian goddess.  The chapter is about a man referred to as the king of Babylon and  Assyrian (in the same chapter). The Assyrians also conquered Babylon and  held it from time to time and appropriated the title  “king of Babylon” whenever they did. In this case Lucifer represents Tiglath-Pileser although the pattern repeats with Sennacherib.

It is therefore not a coincidence that these evil people hold “Lucifer” as their hero. Even Saul Alinsky dedicated his book to Lucifer.  They are quite insane just look at Abramo-witch and her spirit cooking (talk about a bad cook).  They have elevated themselves to the heavens…even the launch of 42,000 satellites to challenge God and turn earth into a prison matrix.  They are truly quite mad.  In the end it will all be brought down. All their schemes and madness will be brought down burning on their own heads.  Satellites are not much use when the sun goes micro-nova which it will within our lifetime.  All their control technology will be fried.

Bye, bye, you are fried.  Of course, this passage was about the destruction of the Assyrian army outside Jerusalem by plague during the Hezekiah Passover.  The reason that it talks about “high ones” is because the Assyrian kings understood this as a battle between  their gods (Lucifer et al) and Yahweh.  They lost and therefore their god lost.

The primary context here is again the time of Hezekiah and certain elements appealing to Egypt for help against Assyria but it morphs into end time prophecy. No doubt some  of these elements were present when the Assyrian army was destroyed but not on the scale described here.   We mentioned else where that for the moon to shine like the sun it would need to increase its luminosity about seven fold.    This speaks of a micro-nova event and the side facing the sun is really going to get hammered.  For anyone interested I recommend regularly checking the space weather on the Suspicious Observers Channel.  I love how Ben always ends his videos:

Earthquake activity, magnetic pole shift etc all accelerating.  We are moving inexorably to the end of this age.  We must witness.  Will the nova happen before, during or after the witnessing?   Will the witnesses experience it or will they be gone?  Still figuring it out but we are definitely living during the last trump and the seven vials.  Do not be deceived by the beast and resist. I love the smell of roast beast in the morning…..it smells like victory. This was meant to be a snippet. Sorry about that I got carried away with a “stream of consciousness”  hope it makes sense.

I still want to do something on the Fourth Gospel and have been writing etc.  I have no time…everything moving so fast.  Why the 4G? …..because it is so beautiful and because it was a resistance text.   It was written before 70 (eyewitnesses) but had a major upgrade before the Bar Kochba revolt to resist the antiChrist (The false messiah Bar Kochba) and matches the repeat patterns found in the Apocalypse.  Jewish-Christians resisting the Beast system of their day. We must learn from them.

So, this was meant to be a snippet but I got carried away.  Still want to do more on 5G and more on earthquakes space weather ….Middle East Politics etc.  I need to clone myself but I don’t think I could stand the company (lol).