Before watching this video and perhaps dismissing it as a “conspiracy”  I would like you to watch the following short videos. Then consider the fact that by year end we will have 42,000 satellites above our heads and 5G will continue to be rolled out.  But as bad as 5G is, it is only the harbinger to 6G which is Terahertz Technology.  It is required for AI (Artificial Intelligence) which is supposedly the next step in human”evolution” (lol).  The videos are short but I recommend searching for more in depth material on YouTube.

Terahertz Technology and The Hyperterahertz Programme: An Introduction

An introduction to terahertz technology and the HyperTerahertz research programme being conducted the Universities of Leeds, Cambridge, Lancaster, and UCL, funded by EPSRC.

The Defense Advanced Research Projects Agency is an agency of the United States Department of Defense responsible for the development of emerging technologies for use by the military.

Now watch the following video on BitChute. As absurd as some of the theories might sound they are all now scientifically possible and billions have been invested in these technologies. Imagine telling someone four hundred years ago about television. They would have called you a “medieval conspiracy theorist”.  The video is on BitChute click the link (Must Watch).

The Governments “Pandemic Response” Is A Crime Against Humanity

Data is the new oil

“Data is the new oil.” The quote goes back to 2006, and is credited to Mathematician Clive Humby, but has recently picked up more steam after the Economist published a 2017 report titled “The world’s most valuable resource is no longer oil, but data”.  If you search for this phrase there are a number of articles on the subject and some argue the opposite and say that it is not the new oil….that it is a bad metaphor.  However, I beg to disagree. Just as cheap energy drove the industrial revolution so data will drive the Fourth Industrial Revolution. Here follows a video of Netanyahu boasting at a Cyber Tech 2019 event about Israel’s intelligence prowess.

In the UK the collected NHS track and trace data will go to GCHQ which has the Israeli cyber unit  (Unit 8200) embedded.  In Australia tracking data etc it will go to Amazon cloud and under the US cloud Act they could access it. As Amazon does the cloud storage etc for the CIA that means Mossad will also have access.  In NYC billionaire Paul Singer is funding an Israeli  cyber unit (based on 8200). The take-away is that they will all have access to your data. Don’t believe  a word they tell you about privacy. There is no such thing.

This new technology will give absolute power to the elite. They will sell it to the public as a health measure….and convenient….etc.  Machine learning algorithms will constantly feed data into the system until it becomes “self aware” (not necessarily conscious).  It sounds like something out of a Sci-Fi movie.  We are facing a whole new level of inter-connectivity where people connect to the “borg” and become “tanshuman”.  The World Economic Forum also promotes transhumanism as part of the Fourth Industrial Revolution. What we are seeing is the wish to create a hive mind.  Be careful what you wish for.  To sum up – our planet is run by moral imbeciles and psychopaths who think they can play at being God. In their grasping after power they are willing to destroy themselves and everything on the planet. Giving these people any kind of knowledge is like giving a monkey a gun. With a bit of luck they might end up shooting themselves before they do too much harm.

I recommend watching his last interview in full if you have 55 minutes.  He talks about AI throughout his last interview and right at the end at about 50 minutes he talks about evil “smart dust” nano-particles that can be powered by RF and used for spying.  Most people have no idea how advanced many of the systems already are. Then there is the new science of quantum dots the new generations of quantum dots have far-reaching potential for the study of intracellular processes at the single-molecule level, high-resolution cellular imaging, long-term in vivo observation of cell trafficking, tumor targeting, and diagnostics. 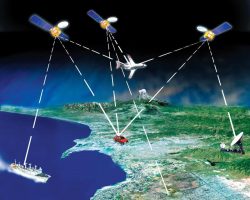 Remember that we had an article on Geoengineering? Well, conspiracy theory is rapidly becoming conspiracy fact.  Main Stream Media (ABC) just aired the following on their Catalyst program; “Is geoengineering a dangerous way of avoiding our responsibility to dramatically reduce greenhouse gas emissions, or a convenient way of tackling global warming? Graham Phillips travels to Europe to investigate this highly controversial movement in climate change science”.

I saw something else on TV today (can’t remember which news station) about satellites so I did an internet search and found this:

Apparently, astrophysicists are complaining because in the future there will be 20,000 of these mini satellites circulating the earth.   A grid of spy cameras?  A grid of listening devices?  A grid of “military” weapons? So it is all a conspiracy theory?  Yeah right. Enjoy your new 5 G phones.