Fear is a powerful motivator, especially fear of death.  The Covid crisis has weaponized fear and trauma and the population has been manipulated.  A recent UK Column report brought a Tavistock article to my attention that warranted further investigation.  The tweet has been reproduced here:

We’re sharing a recent thought piece from our friend Dr Yossi Triest reflecting on the time of Coronavirus.
Dr Triest explores the psychological implications of this ‘plague’, focusing on COVID-19’s psychic counterpart – “the virus of horror”
Read it here:https://t.co/MB9GfDFl7v pic.twitter.com/mimOTOXl9t

Before we look at the article I thought it might be important to investigate the Tavistock institute itself because it has a long history of Psychological experimentation and behavioral manipulation.  The background of Tavistock may explain why Israeli Psychanalyst and Clinical Psychologist Yossi Triest (Tel Aviv University) is writing for Tavistock. It is a very good article and I suggest you read it completely (I believe you get one free view before you need to purchase a subscription so download the page). This particular paragraph stuck in my mind:

The above describes perfectly the UK Government briefings. They are confused and contradictory. People blame the Government for being incompetent.  That is not the case. They are deliberately traumatizing you and making you anxious. This is what Triest says in his article:

The virus was premeditated and the media was employed to deliver maximum fear and confusion.  I maintain that the Jews with their love of psychology and deceptive manipulation are behind this. On his blog on the 28th December (as the virus was just appearing in China) the Jewish blogger Molodyko wrote:

Although Molodyko offers a corrective at the end of the paragraph he seems to be expressing a view that is popular in Jewish psychoanalytical circles, namely gentiles are mentally ill because they are Christians and they fear death.    Of course, any psychoanalyst worth his salt would say that is Jewish projection.  I anything Jewish beliefs about the afterlife are confused and contradictory. In my view that is a recipe for anxiety and mental illness.  Many believe that you simply live on genetically.  Epstein attempted to impregnate as many Mexican women as he could and left instructions that his head and his penis be cryogenically frozen (lol).  Now  that is what I call mental illness.

Psychoanalysis is a very Jewish “science” although in actual fact it is not a science at all.  The father of Psychoanalysis was Freud  or should I say Fraud?

Freud Was a Fraud: A Triumph of Pseudoscience

Moreover, his cousin Bernays was hailed as the father of marketing or propaganda. In other words manipulation runs in the family. 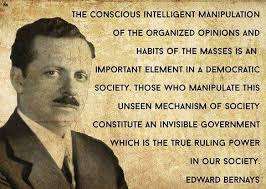 Is it a coincidence that their eponymous father Jacob had a name which means deceiver or trickster?

I take particular exception with the following paragraph written by Triest on the aftermath of the coronavirus world.

He pontificates about the narcissism and vacuousness of the West and rightly so. However, who flooded the West with a debased celebrity culture, social media platforms and a materialistic debt binge?   The Jews did all of that.  With their control of the media, Hollywood, Facebook and the Federal Reserve (to mention but a few) they determined the culture.  It was deliberate not accidental.  An act of sabotage against Christian nations.  Like a invisible “dead” virus they penetrated the corridors of power and corrupted everything. It is called the Hegelian Dialectic – create the Problem and the reaction then offer the solution. They created the problem and now they are about to offer the solution. You won’t like the solution.

Moreover, hunger and literal cannibalism is what happened in the Ukraine when the communists “collectivized” the farms. Millions died in a genocide known as the Holdomor. Many were killed, tortured or raped. Many died of starvation and committed cannibalism. The head of the Secret Service and many of his minions were Jewish. So I find this foul and I will send this “gentleman” and “Tavistock” an email telling them as much.  They regard the gentiles as their slaves and as such we are dispensable.  If you do not believe me go and see what Chabad have to say. They are attempting to induce fear in order to indoctrinate us and make us pliable. Seeing as Triest and his Jewish compatriots have opened the Pandora’s box of psychoanalysis I thought it was only fair to return the favor and see if we can get to the bottom of what I can only describe as narcissistic rage.    The apostle Paul said;

However, it has not provoked them to jealousy but to a narcissistic rage.  This is what Sam Vaknin says;

They act like a child who was put on a pedestal and then inexplicably abandoned by their parent.   After all they were the chosen ones and God walked out on them (that is how they think of it).  The trouble is that narcissist that do not maintain supply are likely to de-compensate by completely wrecking their environment (how is that for psychoanalysis?).  They absolutely resent the gentiles who have usurped their rightful place.  One Jew told me (before the pandemic) that soon “whites” would be ineffectively snapping at their heels. We would be put back in our place.

As Christians we should have no fear of death. Our lives are in God’s hands.

The Jews were subject to the bondage of the Law and all mankind was subject to sin and death.  The Jews are now trying to turn that fear of death against the faithful.  However, it will not work because we have been liberated and we know that the fearful and  the liars will end up in the lake of fire (Rev 21:8).

In fact there are those who argue that the nation of Israel is suffering from collective psychopathy. We leave you to make up your own mind. Suffice to say that people in glass houses should not throw stones. Even more to the point the Zionist want to ban BDS and introduce more antisemitic laws and force gentiles to love them.  Why not just change the way you behave?