Sometimes all you have left is a sense humor. If you didn’t laugh you will cry. A good laugh relieves stress and is good for your health.  Monkeypox or Money-pox?

1./ Black humor the is the only cure for Monkey Pox. The cure is to eat bugs and get a minimum of 12 gene therapy shots per annum. Also never leaving your bedroom will reduce your risk of exposure. WE WARNED YOU. pic.twitter.com/nOsWAer2D7

3./ They have been running “exercises” on Money Pox. They always like to practice before they force you. Make you nice and frightened. pic.twitter.com/psjQf4v8rp

5./ A Pox on all of them. May the Almighty pour out a noisome grievous sore on them all.😡😡 pic.twitter.com/d37RIIwxey

Jewish Hitler and Zyklon B vaccines

I did not know whether to tag this under humor, conspiracy or history (lolz) so I used all three tags.   I save video links and articles and then when something interesting comes up it gives me an opportunity to put them all together.  Is it conspiracy?   Some of it is.  Is it funny?  Well I think a gay Jewish Hitler is funny. Is it history?  Some of it is.  This is what triggered the article (lolz):

Dani Dayan, head of @yadvashem condemns Sergei #Lavrov because of his claims that “some of the worst antisemites are Jews”. The Russian Minister of Foreign Affairs also repeated the myth that #Hitler was of #Jewish descent. https://t.co/tO52JQS8kY

I suggest someone report Lavrov to the antisemitic hate-line (lolz) :

Perhaps Lavrov stumbled across these websites (now removed but still available on the way-back archives):

Of course, the fact that “Kristalnacht” was organized by the Zionists and that the Nazis had an arrangement with the Zionists to help transfer Jews to Palestine is not Germaine to the question, nor is the fact that the Jewish Zelenskyy is perfectly happy to cooperate with  Nazi Azov brigades.  History does not repeat but it rhymes. 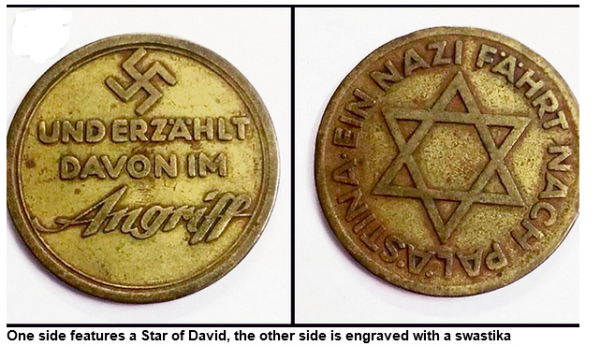 I could not resist this heading after coming across another article by Walter.  Now although his article is rather sensationalist it is becoming clearer that the S-protein (either from the virus or the vaccine) does effect mitochondria. Among the many other inflammatory and amyloid pathways the S-protein dysregulates electron transfer in a similar manner to other compounds (hence the Zyklon-B comparison).  We will see an increase in mitochondrial diseases (especially for those already genetically predisposed) but it will not be like walking into gas chambers (lolZ) but rather a slow deterioration in mitochondrial function.

I have not watched this yet…but just discovered this channel:

How could I not complete the article by featuring Springtime for Hitler and Germany. All the world is a stage…said the octogenarian William Shakespeare…before getting the vaccine (which killed him) administered by a laughing Matt Hancock (lolz).

We lie to you

This has been tagged under humor but really it is not funny.  Absurd would be more fitting to describe it.   This is cultural Marxism or the Hegelian Dialectic in action.  They are deliberately breaking down all societal norms and taboos.  This is not an accident.  It is meant to upset you and make you angry.   They are hoping to provoke a reaction.  They always bet on both sides.  Whatever happens they win.   If their is a violent backlash and Trump makes a come back they win.  It will completely fragment society.   On the other hand if Bidenstein et al wins they also completely fragment society.  Win, win.  When you own all the horses in the race you always win. As George Carlin would say, “its a big club and you ain’t in it”.

One Big Club….And somehow you think that Putin is draining the swamp….😂 pic.twitter.com/qQZ3Tr8nXf

Times’ “Woman of the Year” has a penis. #ThisIsTheEnd pic.twitter.com/1Rm8SkPtdy

Woman of the Year is a man Best woman’s swimmer is a man pic.twitter.com/OEZRKNu2zn

You are being nudged. It is deliberate.

Transgender Rachel Levin (till 54 she was a man) was promoted to the rank of four-star admiral by Biden for the first time in the US history. Today the USA Today named Levine “Woman of the Year”. pic.twitter.com/D1lxrG0dsv

@risemelbourne @razorback11111 @sweettalkin1970 @AardvarkAudrey @Valkyrie20201 @JaggerMickOZ
Why are we joking about war, death and misery? We refuse to be made frightened or anxious. We refuse to be haters. We feel for anyone who suffers in banker wars. pic.twitter.com/90YTYyZUIE

If you think the next meme is a joke look at the NATO diversity policy. I bet the Russian spetsnaz are terrified. We are facing nuclear annihilation and death by Covid and the heads of NATO are meeting to discuss transgender bathrooms.   Putting the DIE back in diversity. (lolz)  Might as well wave the white flag already. The cultural Marxists have completed their long march through the institutions.  Nobody finds it strange.  I hope they paint rainbows on their gay bombs. See if you can spot the guy with the gay dog tag around his neck (lolz).  What happened to the West.

Diversity is our strength.

Retweet to join us in celebrating the differences that make us stronger 💪#ZeroDiscriminationDay pic.twitter.com/As4phmspXR

Now the same people who gaslighted and shamed us about covid are making jokes about it.  They are trying to walk it back.  Pretending they were on our side all along. Now we have a war to distract us and take all the blame.  People have the attention span of a gnat.   Not going to happen.  There will be a reckoning.

It looks like red wine, cannabis and nicotine all help to stop covid.  Now there is a health regime we can all approve of (lolz).  The brain is probably too juiced to let the virus do any damage (lolz).   Finally some good news.  Who cares if it works….at least you will no longer be worried about covid.  Can I get a prescription?

I thought I was getting better but suddenly I went blind. pic.twitter.com/A2pynSmist

We  were right about covid being a cult with the cult members “drinking the Kool Aid”  like they did in the Jungle with Jim Jones.  How else can you describe it when people are impervious to reason?   There is no common sense or critical thinking just blind fear and obedience.  I know that the powers that be (TPTB) have used behavioral psychology and Neuro Linguistic Programing but even so people must bear some responsibility.  Take this woman as an example she has alienated her whole family and killed her dog. She is so stupid she has allowed them to divide and rule. They will use politics, covid,climate and anything else to keep you from uniting so that they can usher in their N.W.O.  What this extremely stupid woman does not realize is that there will be no place for her in that order. She destroyed her family and is about to destroy her immunity.  Some people just can’t be helped.

Maybe she should get fully waxxinated, wear a mask and sit in the middle of Antarctica to avoid catching Omicron.  Oops! (loz)

Perhaps if she keeps testing she can avoid Omicron (lolz)

Another “I told you so” because I have been saying the same for over a year. But, meh….the public are still not listening. https://t.co/Q9BEZfdqU4

You mean it is not working…?? Why did no one warn me? (lolz)

A criminal cabal who do not care about your health. pic.twitter.com/PZDcZxh3SF

I also tagged this under humor but it is not funny. You should not mock retards.

I tagged this under humor but the subject matter is not really funny  but JP does a good job holding it up to ridicule.  And people still think this is about Public Health?   Let us all just comply and follow the rules and it will all go away.  I have never seen people so frightened and dumb.  Masks do not stop tyranny and nether do vaccines.

And in case you think it is just NY.  The ground is shifting as we speak. They are getting people ready to accept arbitrary detentions in the name of health. This is Marxist collectivism by means of the health system.  Do not be fooled.

Disgusting. In NY they want to pass a bill for indefinite detention if you are "deemed" a health risk. These people know no shame. Their criminality has gone on long enough. Marxism via Public Health policy.https://t.co/jPy4zHV3SM

JP with Brandon’s death wish on the unvaccinated (lolz)

Feeling a bit low with canceling Xmas and thought I could do with a laugh so here is JP and Doctor Clown.  All you can do is laugh at the madness of crowds.  People go mad in crowds and only wake up one at a time.  What they have done to us is criminal and disgraceful.  There will be a reckoning. Have fun mocking these loons. The first four videos are less than 3 min.

Rona Around the Christmas Tree

Another Jab For Christmas

Why You Need a Second Life Jacket! (8 min)