Now for something completely different. I watched this to give myself a break from the black-pills and it is extremely good and highly recommended.  You should watch this on a large TV screen and it is even good for a Sunday school class probably for kids above 14 age. This is a 3 hour documentary on Assyria and it is high quality and well scripted video as part of a series about Lost Civilizations it already has half a million views in just over a week.

Early on they ask the question: “What was it like to live at that time and witness the end of your world?”    I thought that was very appropriate because we are a generation that will witness a similar type of upheaval.  They mention that the earliest settlements in the fertile crescent are between 9-12 k years old. That takes us to the last catastrophe cycle and the beginnings of civilization which coincides with our biblical accounts. I believe the Sumerian/Akkadian civilizations came and were followed by the Assyrian which lasted thousands of years.

At 1 hour 22 min the Assyrian king Sennacherib invades Judah. This is the Assyrian invasion of 701 BC in the time of Hezekiah.  The account in the video follows the Biblical history very closely but I would argue that when Hezekiah stripped the Temple as a tribute payment that it was probably done in his name during the period of his sickness.  In any case Sennacherib did not uphold his end of the deal.  The neo-Assyrian Empire features largely during this prophetic period which saw a large flourishing of pre-exilic Biblical literature which forms the basis of the statistical linguistic (stylometric) and exegetical analysis of my commentary Dark Sayings.

Interestingly, at  2 hours 30 mins rapid climate shift is partially blamed for the collapse of the Assyrian Empire. Babylonia at the southern end of the Empire had always been arid and employed irrigation but the North had been very wet for the previous 200 years and then the weather patterns suddenly changed as stalagmite data shows that in 675 BC during  the reign of   Esarhaddon (son of Sennacherib) one of the wettest periods (very fertile) ended in 725 BC just before Ashurbanipal came to the throne drought conditions and economic disadvantage followed but it was the Medes that delivered the coup de grace after the Assyrian genocide of Elam the Medes knew that there was no more check to Assyrian expansionism unless they curbed Assyrian power.

At 2:46 the documentary mentions the prophet Nahum who wrote about the end of the Assyrian Empire, and its capital city, Nineveh, the bloody city, in a vivid poetic style. The Assyrians were cruel and used terror as a policy of state. The Documentary does not mention Jonah who prophesied during the reign of Amaziah of Judah, as mentioned in 2 Kings 14:25 which was probably contemporary with the reign of Adad-nirari III as Edwin R. Thiele dates Amaziah’s reign from 797/796 to 768/767 BC (but on this see Andrew Perry’s dating of Kings). Amaziah was succeeded by Uzziah. Although Jonah is not mentioned a historical account is given of a prophetess of Harran who predicted the downfall of Assyria. Haran (or Harran) in Turkey first appears in Genesis as the home of Terah and his descendants, and as Abraham’s temporary home. 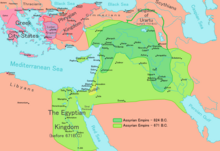 The Neo-Assyrian Empire at the apex of its power in 671 BC, in the reign of Esarhaddon