A few new websites to bookmark and add to your alternative news etc.  We try to recommend websites that are unbiased and propaganda free.  Some of the sites are left-leaning (anti-imperialist). However, sometimes we refer to a “patriot” (Zionist) website as it is good to know what everyone is thinking (like X22 report or the mysterious Qanon intelligence drops).

The following website is completely pro-Trump “patriots” and is often quite crazy. It is called Sorcha Faal  and all the intelligence drops purport to be reports to the Kremlin (LOL) presumably made by the Nuns of Sorcha Faal (LOL).   Yes, I know. It is craaazeee.   The reports consist of many hyperlinks woven together to tell a story. Sometimes (often) the story makes no sense.  However, the work that goes into this production suggests that it is run by a team (not one person) and it is interesting to see what “spin” they put on events.  The next images comes from one of their reports.   The story was ridiculous and obviously spun to place Trump in a good light…..but I found the links very interesting.  So, I have gone to some of their links and reinterpreted the story.  In their story Trump is acting (the assassination) in order to help unite the Muslim World (LOL).

This article throws Saudi Arabia under the bus and even mentions them as the perpetrator of 9/11. This is very good propaganda because it contains an element of truth.  What this story says is that Saudi Arabia corrupted the Islamic world by adopting the Petrodollar system.   It made the Islamic world dependent on the USA (the Jews).   On the 18-21 December the Islamic world (52 countries) including IRAN but excluding SAUDI ARABIA had a conference wherein these combined Sunni and Shiite powers announced the launch of a common currency called the dinar to be used between participating Muslim states to forever replace the US Dollar.    Apparently Trump wants peace with the Islamic world and the US is OK with their desire to get rid of the dollar (LOL).   Those stupid Iranians why can’t they understand that killing their revered general was a gesture of peace (LOL) meant to punish Saudi Arabia (LOL) and unite the Islamic world behind a new currency (LOL).  Anyone who believes this bull has been lobotomized.  So why do I include this website?

The website is included because the links are good (placed at the end of this piece) but the story is complete spin as a moment of critical thinking  reveals.

1. What the article says about the Petrodollar is true

2. The Anglo-Zionists do not want the end of the dollar

3. The end of the dollar means the end of empire

This article is complete disinformation  and I cannot believe that Trump voters would be so stupid as to believe it.  It smacks of desperation and damage control.  What is interesting is that (((they))) whoever they are admit the truth (partially)…..it was all about the petrodollar and the conference.  Now for some images from the article. Note that there are 52 countries attending.

That number stuck in my head because of this tweet  (coincidence???):

Here is their other image (all true): So, now when a Trump supporter hears about the assassination it is a “peace initiative” (LOL P.S. Didn’t Trump say that it was done to prevent war?  Perhaps the Iranians should assassinate a few US generals and politicians to help prevent war. This is classic Orwell doublespeak War is Peace) and the disappearance of the Petrodollar is Trumps greatest desire.   Listen up Trump voters……I am not partisan. I am a Christian (like many of you).  I do not vote. I am not American.  I do not like the progressive, liberal cultural Marxists and detest Hillary as much as you do.   However…..do you really believe this crap?   Trump is not the orange Jesus.  He is not the chosen one.  The Saudi’s could have dismembered Jamal Khashoggi on the Presidents desk in the White House and he would have DONE NOTHING.   Grow up…you are being played.  If you are not honest (even with yourself) what hope have you got? Trump executed the man (general Soleimani) most responsible for the systemic destruction of ISIS and neutering of Al-Qaeda in Syria and Iraq. He’s also a man, over the years, who has fought the U.S. to a standstill across the Middle East.

The link to the original story is here and here is the link to the Islamic summit.    The other story that attracted my attention was the one about drones doing a grid search of Colorado.   I have read this mysterious info on other sites. The speculation is that an atomic weapon is “missing”.  There is no way to know if that is true or not but a US atom bomb (dirty bomb) explosion by Iranian terrorists would never happen would it?    Very unlikely.  About as unlikely as two planes hitting three buildings. I think we are going to see the “mother” of all false flag attacks.   After all they got away with 9/11 didn’t (((they)))?    So, shall I call it?    The big bang.   That should deflect from economic collapse and give an excuse for “total war” (LOL).   Oh, and a side benefit is that all dissent can be crushed under the guise of more “security”.

This blog seems pretty good (I will be exploring it).  Robert David Steele is ex-intelligence don’t mix him up with the infamous Christopher David Steele of the Trump pee-gate golden showers nonsense “dossier”.

This website is good for providing confirmation (additional information) on military matters. As always, with all websites THINK CRITICALLY.  Investigate. Make up your own mind.

Honorable mention of a Wire article

I am going to highlight certain sections of this article – Awaiting the Mahdi: Soleimani’s Martyrdom and the End of Stupidistan. First, however, I place my own image next to the quotes as I find it more suitable: 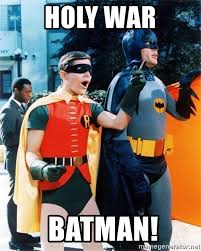 The point that I want to emphasize is that what is coming has a HUGE RELIGIOUS ELEMENT. It doesn’t matter if you believe or not, whether you are an “infidel”, atheist or believe in faeries.   This is “Holy War” Batman!  Whether you are Muslim, Evangelical Christian or a Jew who believes that the Third Temple needs building before the Messiah can arrive.   It does not matter if you believe any of that stuff.   It will shape the world around you whether you believe it or not.  Not only that, it will inevitably be manipulated by the Psycho’s who run the world to maintain power.

P.S.  All we need now is for the Dome of the Rock to be “accidentally” hit by an off-target “Iranian missile” and the site would be cleared for the Third Temple.